The AEPD has found that the social network collects, stores and uses the information for advertising purposes without the consent of the users. The Spanish Agency of Data Protection has been sanctioned to Facebook with 1.2 million euros for violating the rules of data protection, the realisation that the social network collects, stores and uses data for advertising purposes without obtaining the consent.

As reported by the AEPD, the data on ideology, sex, religious beliefs, personal tastes or navigation are collected directly, by interacting with its services, or from third party websites without clearly inform the user about the use and purpose that he’s going to give the same.

Facebook does not obtain a consent «unequivocal, specific and informed consent» of users to treat their data, since the information it offers is not adequate, according to the Agency of Data Protection.

In addition, the personal data of the users are not totally cancelled when no longer useful for the purpose for which they were collected, or when the user explicitly asks for its removal.

The Agency has determined that you have committed two serious violations and a very serious Data Protection Act and has imposed on Facebook two penalties that add up to a total of 1,200,000 euros.

In the research, the Spanish Agency of Data Protection has found that Facebook collects data on ideology, sex, religious beliefs, personal tastes, or navigation without informing clearly about the use and purpose that he’s going to give the same.

It has verified, in addition, that the social network treats data as «specially protected» for the purposes of advertising without having obtained the express consent of the users, as required by the data protection legislation.

That offence this offence as «very serious» in the organic Law of Protection of Data.

The research has also allowed us to verify that Facebook does not inform users in a comprehensive and clear about the data you will collect and the treatments that you are going to make with them, but merely to give some examples.

As reported by the Agency, the social network collects other data derived from the interaction performed by the users on the platform and on third-party sites and these may clearly understand the information that Facebook collects about them and for what purpose you will use it.

The AEPD has also confirmed that users are not informed of who is going to treat your information through the use of «cookies» when they browse pages that are not Facebook and that contain the button «I like«.

This situation also occurs when the users are not members of the social network, but ever visited one of your pages, as well as when users are logged in on Facebook browse pages of third parties, even without logging on to Facebook.

The social network refers imprecisely to the use you will make of the data it collects, so that a user of Facebook with a medium knowledge of the new technologies do not become aware of the collection of data, its storage and subsequent processing, or for what they are going to be used.

For their part, internet users are not registered do not know that the social network collects your browsing data, according to the Agency of Data Protection.

Therefore, the AEPD has been estimated that Facebook does not collect properly the consent of either their users or those that are not, and whose data is also treated, which constitutes a violation classified as «serious». 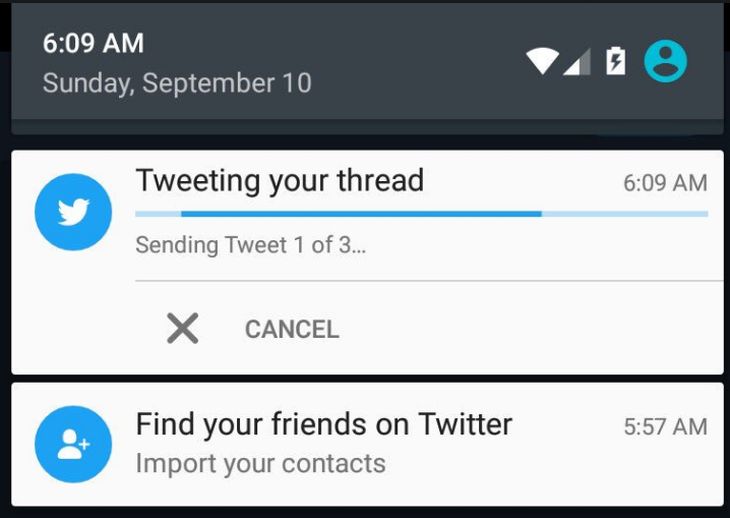 Some users of the mobile application for Android Twitter are finding themselves in these last few hours with the own microblogging network is testing a feature that will make it easier to do a tweetstorm, that is, make a thread of tweets from the same conversation where 140 character tweets seems to be insufficient to be able to express everything you want to say.

The idea is that users can write without limits from the beginning and then the application itself will be dividing the message into a sufficient number of tweets.

The feature, of course, will be pointing out in real time the number of tweets that will be needed to be able to post the entire message you are writing.

Until now, the only way to make tweetstorm is to go by posting tweets and continuing as answers, creating a thread with several tweets, or go directly to specialized applications that work in a similar way to the feature that is being tested in these moments.

From the own microblogging network does not want to pronounce on the issue, but getting this feature to the rest of users, will make the experience to express themselves publicly is enhanced without losing the essence that makes Twitter a unique service.