Are you a man and you’re tired of seeing you forced to take the first step to get to know a woman?

Or you are a woman fearful of what you may think a man if you dare to contact you on their own initiative? 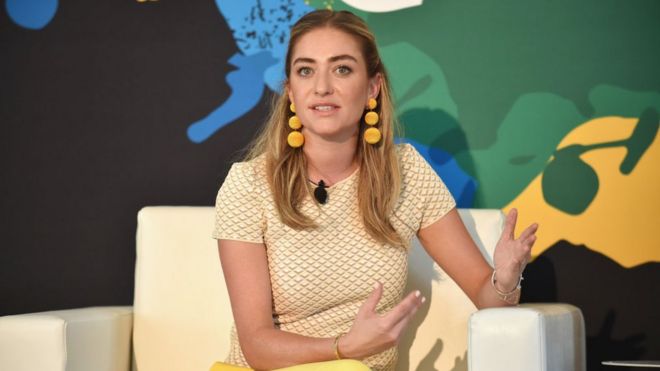 This is the target audience Bumble, the dating application where only women can start conversations once two users like each other.

In a little over two years, the app has become one of the most important, with more than 18 million registered users.

The signature is presented with a feminist discourse that has helped her to become a hollow in a sector popularized by Tinder, the app that managed to find a partner in the network to stop being seen as something weird.

But this is not the only connection between the two applications.

Bumble is the brainchild of Whitney Wolfe, a exdirectiva of Tinder that was part of its founding team.

Wolfe served as vice president of marketing of this company until the breakup with her boyfriend, another of the founders, almost finished with his career.

Wolfe defines itself in each interview as an ambitious woman who does not wait for things to come. If she wants something, takes the initiative and moves to achieve it.

He was born in 1990 in Utah, a state where the majority of the population belongs to the Church of jesus Christ of Latter-Day Saints, better known as the mormons.

Of a jewish father and a catholic mother, grew accustomed to criticism and rejection. Something that helped him cope with the harassment of the media that he suffered after ending her relationship with Justin Mateen, the chief marketing officer of Tinder.

Mateen did not take well to the breakup and the tension between them became unbearable, as it has tended to have it.

The executive sent during work hours threatening messages and in which he demanded explanations about his personal life.

This is demonstrated by catches that Wolfe is attached in its complaint against the company for sexual harassment and discrimination.

«You’ll regret this once your behavior you have finished with the tenderness that I feel for you», could be read in one.

Wolfe told him to stop because they were in the office and that she felt threatened and harassed.

«Yes, if I can’t take well with you and that starts to affect my work too much, not for me, but the effect will be your departure«, he came to admit Mateen.

To this were added derogatory comments and disqualifications.

The young man asked for help from the director of the company, Sean Rad, who responded by pushing him to resign.

The case was closed with an agreement that, while Tinder did not accept any blame, should pay the exdirectiva a figure which was not made public.

There were a few that were in favor of the executives of Tinder and the network is filled with insults against Wolfe.

«Until recently, Travis Kalanick (the former director of Uber) I was on the front cover of all the magazines saying ‘I am Not a bastard’. Do you think that a woman could do that?», recently declared to the british newspaper The Times.

«For a man to have as a complaint is almost a badge of honor. It does seem like in the wave, crazy,» he said.

«When a woman is involved in a legal problem, people think: ‘don’t hire. It is a demon. Going to go behind you.»

But there was someone who bet on it: Andrey Andreev, the general director of the network social dating Badoo.

He persuaded her to return to the industry of the applications for flirting and together they got to work on a that empoderara women.

An app that avoids the biases that appear when a woman takes the initiative instead of sitting to wait for a man to decide to establish contact.

«I began to think about how it feels to be a young woman who goes out with guys and I realized how bad was the situation and how painful it is», said a month ago in an interview toThe Guardn.

«I realized how many days and nights  because a man was not answering my messages».

The mode of dating is very similar to Tinder, with a drift towards the left for those who do not convince us and to the right for those of us who like.

The main difference is that, once you have the «match», the user has24 hours to initiate a conversation. If it does not, the boy will disappear from your chat list after this time.

«Let’s be honest, nobody likes the messages or connections that do not lead to any side», he explains to new users the introductory message.

The app has a paid service that allows you to retrieve connections that have expired or avoid expire. It also shows who has a crush on you but still you have not reviewed.

The firm claims to have helped more than 7,500 engagements and weddings.

A million women take the initiative to date and their users tend to spend about 90 minutes in the application.

This registers 10,000 million swipes a month, a quarter of which are given in Tinder, which continues to lead this industry.

Although men may not take the first step, if you have the option to prolong the connection for 24 hours more to give to understand that they have a special interest in a user.

If both people are of the same sex, either of them can send the first message, as these regulations were designed «to solve an outdated problem of heterosexual relationships», as explained by the firm on its website.

With arguments like this, the app vetoed last year to an user who posted a conversation with another user who criticized them for «sniffing around» in his professional life.

After exchanging greetings and a «How’s it going?», the woman commented that it was «a little slow on the job» and asked what did.

He responded with a series of messages of outrage and anger, accusing her of being a concerned and try to figure out what is your salary range. In addition to any insult.

The firm decided to delete your account and publish a letter in which he «explained» to the user that «currently, the women work. It is something that happened little by little, what we know…» and that the girl was trying to «connect talking about one of the basic routines in life.»

«We will continue to build a world that kids from closed mind and misogynists like you are seen as of another era».

«We hope that one day you will be a… Until then, consider yourself blocked Bumble», concluded the letter.